Nina Simone once sang – “it’s a new dawn, it’s a new day, it’s a new life for me, ooooooooh. And I’m feelin’ good”. Pretty much how I feel every morning, or at least how I’ve felt for 50 years 2 months of the 50 years 4 months of my life. A feeling I especially had when I decided to start this venture and brew full time.

Yep, it’s been a funny 2 months. As you know, I started up in earnest in February of this year, just as lockdown occurred. This meant, like many, a need to massively adjust what I was doing, hence the switch to cans. Not something I, quite frankly, wanted to be doing from day one. But, if nothing else, I have always been super flexible, super adaptable and always comfortable to adjust what I am doing, both professionally and personally.

The 1st 4 beers canned have been received OK, from a personal point of view nowhere near the standard I am aiming for, but improving with every brew.

So, where are the new beers you are wondering?

I had 4 cans go down well, and have received huge support from both a core of wonderful local people, and from further afield and from trade. The plan was to increase output a little and be canning 3 beers a time every 2-3 weeks. However, having just installed my kit and started brewing in January, i expected some teething / bedding in issues. With everything else going on, I have had to battle through such issues to get beer out there. I’ve not been happy with what’s been out there (I never will be) and unfortunately some big challenges happened during 2 brew days, affecting the overall process and ultimately the resulting beer, so much so that I have tipped 2 brews away due to them being substandard. This, on top of 2 issues causing 2 mashes needing to being dumped half way through, has been a bit of a kick on the balls.

Now, I’m not one for being negative, or dwelling on things, Setbacks are something to ignore. You put them behind you, pick yourself up, and crack on. That’s what I do. However, unlike me, I’ve had something of a shit, wasted month. I just want to be getting good beer out to you lovely people and the issues I’ve had, plus the effect of lockdown and the usual bi-annual cycle of waiting for cancer scan results (delayed, which didn’t help), I think resulted in me being a bit under the weather by my own standards. So, I’ve had the day off with the fam, I’ve been sorting issues out at the brewery and, most importantly, I’ve just re-brewed “Life Was Peachy” DIPA (8.5%) and “The Number Of The Feast” Stout (6..66%). Feels like a month wasted, in fact it has been a month wasted, but back in the game.

In 2 or 3 weeks these will be canned with a triple fruited Gose. I’ve also planned the next 3 beers after these – a return of a table beer “You Can’t Quit Me Baby (3%), a Mild (Yes, a Mild in cans!!) and a NZ hopped IPA I’m particularly looking forward to, that will be around 6.,5%

So, what’s the plan moving forward?

Well, Tap Room plans are on hold at the moment. i occupy a small space. The safety of you all is hugely important. There is nothing I would love more than to have built and opened the Tap Room now as planned and be welcoming you all. Sadly that will have to wait. The plan is to shortly start getting the Tap And shop ready so I’ll at least be able to offer collection of small pack, and container fills, both of Leviathan Brewing beer and selected guest, so please bear with me.

Production wise, as I mentioned, next 6 brews are exclusively cans, but the plan after that is 2 :1 can and keg. 2:2 if I can get hold of another Unitank. I’m also in prelim chats with the unit next door with regards to taking over that, which will allow expansion. Seems weird talking expansion when I’ve just got going, but with the current 5BBL brewhouse more fermenters is the most cost effective way off increasing production to allow both cans and kegs moving forward, given subcon canners MOQs.

To finish, just want to give a MASSIVE shout out to everyone who has given Leviathan Brewing and me huge support over the last 6 months. You’re the reason why I will continue to build on what I’ve started here, so THANK YOU, it means SO MUCH.

Around this time I had hoped I’d be able to open our Tap Room doors to the general public. With the onset of the Covid-19 outbreak this was obviously put on hold and, until experts and not politicians decide what is safe, this will remain the case.

To enable the business to continue to trade through these difficult times I have been canning every brew and selling them largely to trade and some direct via the webshop. This will continue and there will be 3 new beers dropping in a few weeks.

One thing I have been looking into is allowing orders to be placed for collection, so that I can remove the current minimum order value of £30 and I am pleased to announce that from next week I will be offering this option.

To take advantage of this simply order and pay through the site in the usual way. You will see that for orders under £30 no shipping options are available, only collection.

Orders over £30 will qualify for delivery in the same way as now, with free local delivery still available for all B and selected WS postcodes. Further afield will remain at £7.50 for delivery.

Initially I plan to open for collections from 12 – 6pm Monday to Friday. Please do try and allow a little time between order and collection, to allow for your order to be packed and to avoid unnecessary waiting around.

I would stress the unit will remain closed to the public for the time being, for the safety of you all, so I will only be able to handle orders placed and paid for in advance via the webshop. 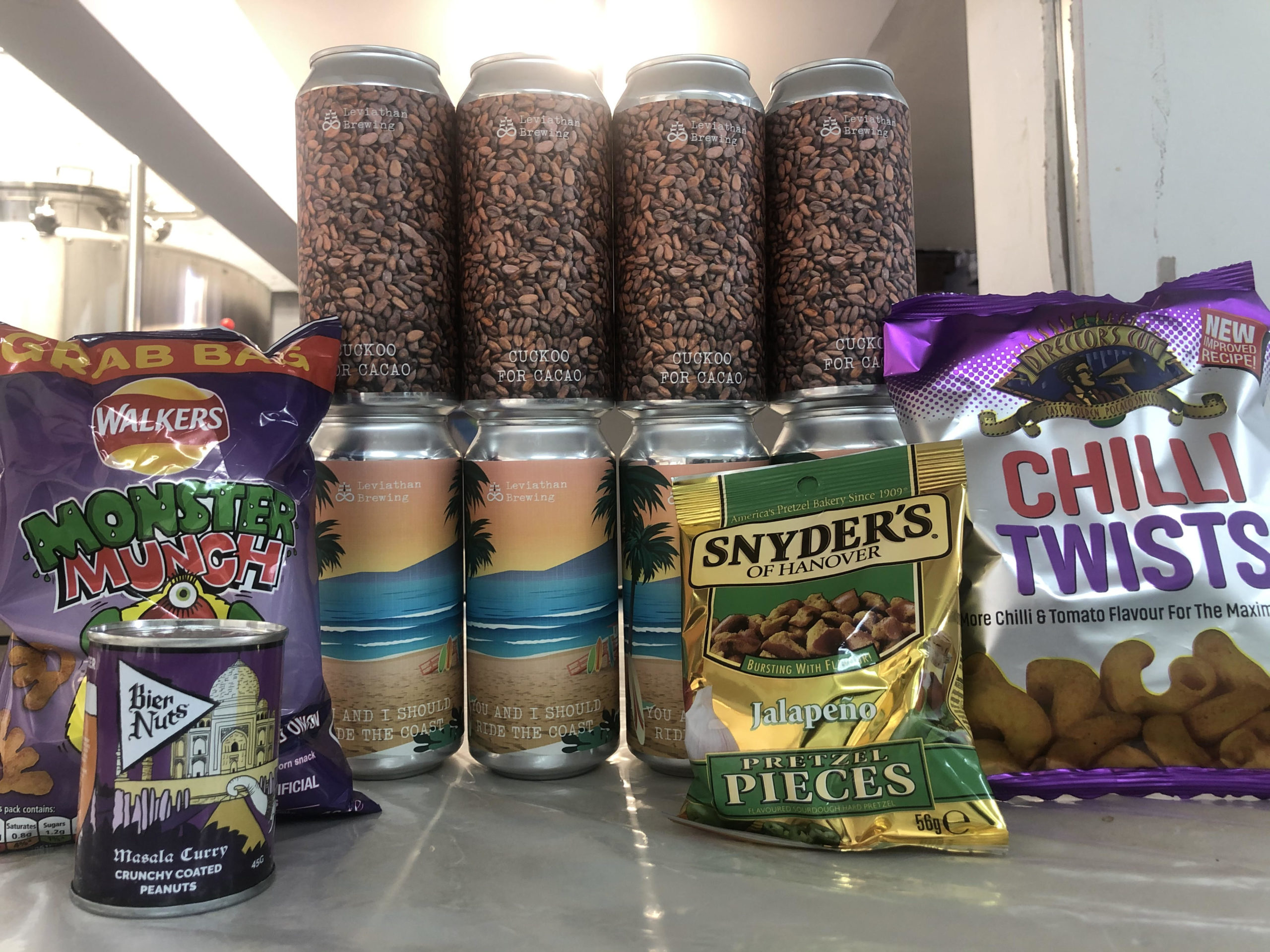 We’re now out of stock of 2 of the 3 beers that made up the bundle we have been offering. We still have our Black IPA, which seems to being well received out there, plus a large range of fantastic guest beers available.

We’ve 3 new beers dropping in a few weeks from now, but in the meantime we’ve a new ‘Tap Room @ Home” bundle to keep you hydrated!

Simply add any 10 beers or cider, plus any 2 snacks and enter the COUPON CODE “TAPROOM10” at checkout to get 10% off your beers, plus the snacks for free!

Don’t forget, we offer FREE delivery to B (and selected WS) postcodes and £7.50 shipping UK wide.

I just wanted to give a quick update with regards a few web shop related things!

First up – merchandise.  A number of items are now back in stock – various size hoodies, caps and beanies and can be purchased now from the relevant section in the store!

Secondly, to improve the store functionality and ease of use, I have now added a product search and filter section to the right sidebar as shown below.  This allows you to filter products by category, style of beer, brewery, abv % etc.  This is will be fully live by the end of today.

I hope this makes navigating around and finding beers a little easier!

I am also in the process of adding a lot of amazingly good guest beers to the selection, so check back later to see the full range available!

Following last week’s DIPA brew, I’d two more brews planned before I get all 3 packaged into cans in a few weeks.

Today was brewday of beer number 2. I wanted to brew something light, refreshing, indeed ‘summery’, if that’s a valid beer descriptor. I also wanted to try something mixed ferm for the first time on the grown up kit. With all that in mind, today’s brew was a Triple Fruited Gose!

Brew day went smoothly. The recipe was a traditional Wheat heavy and Pilsner grist, Himalayan sea salt and coriander added during the boil. I have literally just pitched a combinatation of a Lacto blend and German Ale yeast, and the beer is now in tank doing it’s thing for a few days, before I add a metric fucktonne of pureed Redcurrant, Blackberry and Blackcurrant.

I hope this will turn out as a nice, light, low abv, smashable summer beer. Obviously, I’ve wracked my brain as usual to come up with an inspired musical themed choice of name, suited to the beer. “Summer Breeze” by the Isley Brothers? Nice! “Miami” by Will Smith? Cute! Really worked hard on this over recent days to come up with something befitting of this ‘summery’ beer!

I give you “Red Before Black” (by Cannibal Corpse). Summery AF that tune mate.

Alright folks! It’s been a month or so and i thought a new blog post was due!

Since the last update we are now in what appears number 2 of what will be an ongoing cycle for the time being – brew and can 2 beers, have a spike of sales which gradually tails off, get busy brewing again and repeat.

The plan for the time being is to brew 3 beers, can and repeat and finally we’re almost there. We brewed last week something big – a 8.5% DIPA – and have 2 more beers planned in the next few days to complete the set of 3 that will be canned in cycle 3.

This week we’ll brew a triple fruited Gose, with Blackberry, Blackcurrant and Redcurrant, a big first for us yet something we are very much looking forward to brewing this week. Following that will be either a 6.66% milk stout or another very juicy IPA!

In other news, we’ve spent a bit of time recently updating various parts of the site to make things a little clearer and easier to use!

Our Web Shop is now LIVE, with our latest beers on sale NOW with FREE local delivery. We now stock a wide range of guest beers and ciders!! Dismiss

We have a new "Tap Room @ Home" bundle available! Simply select ANY 10 Beers / Ciders, add any 2 snacks and at checkout add the coupon code 'TAPROOM10 to receive 10% discount off your beers, plus the snacks for FREE! Click here to go to our webshop!